Recently, I had to correct the mistake I made in leaving the notes I’d complied while rereading my stories ignored for up to five months. These are my editing notes: typos, poor word choice, missing words or explanations, those sorts of things. All of that I try and pay attention to when I’m reading so that I can help the editing process along. Rereading and editing is my process.

The danger in that, of course, is getting caught up in the stories again. I reintroduce myself to old friends, and the longer it’s been since the last time I read the story, the more I miss the characters.

Now I would love to tell more stories with all those old friends. It’s been too long, though, and I don’t mean just in the sense of how long it’s been since I’ve read the story.

I have this distressing feeling that I would not be able to capture the true essence of the characters after this long away.

Last time I tried to do something with Frankie and Rico from In the Family, Frankie was nothing like herself. Attempts at sequels for The Geek and the Fed and Tearing Down the Pedestals left me with two stories at the same time that were out of character.

On the other hand, I was able to pick up The Lady in Black, The Consultant and the Cat, and Criss-Crossed Paths after years of abandonment and finish them. I think the difference there may be that I had started them by hand, and I had to type them before continuing them, so the flow was still there, the mindset and understanding of the characters.

Starting the sequel to Tearing Down the Pedestals almost immediately after finishing it did not keep Chel and Tremayne in character, though.

So I’m not sure. I don’t know what that elusive quality is that would allow me to pick up where I left off with the characters (or even jumping ahead a little) and keep going.

I want to find it, though. I miss my old friends. I want to continue having adventures with them.

The design part of Kabobbles has been putting a lot of work into the cover for The Consultant and the Cat.

This would wrap around like a print book’s cover. We will be offering to print versions as well as the ebooks, but the print version may not be available at the same time as the ebook release. Not all of this image will end up on the front, but here’s a sketch to show the general idea.

I added in a bit of text, but it probably won’t stay where I put it, and the colors aren’t quite right yet. The leopard will be black, not just an outline, but this gives you a sense of what’s coming. 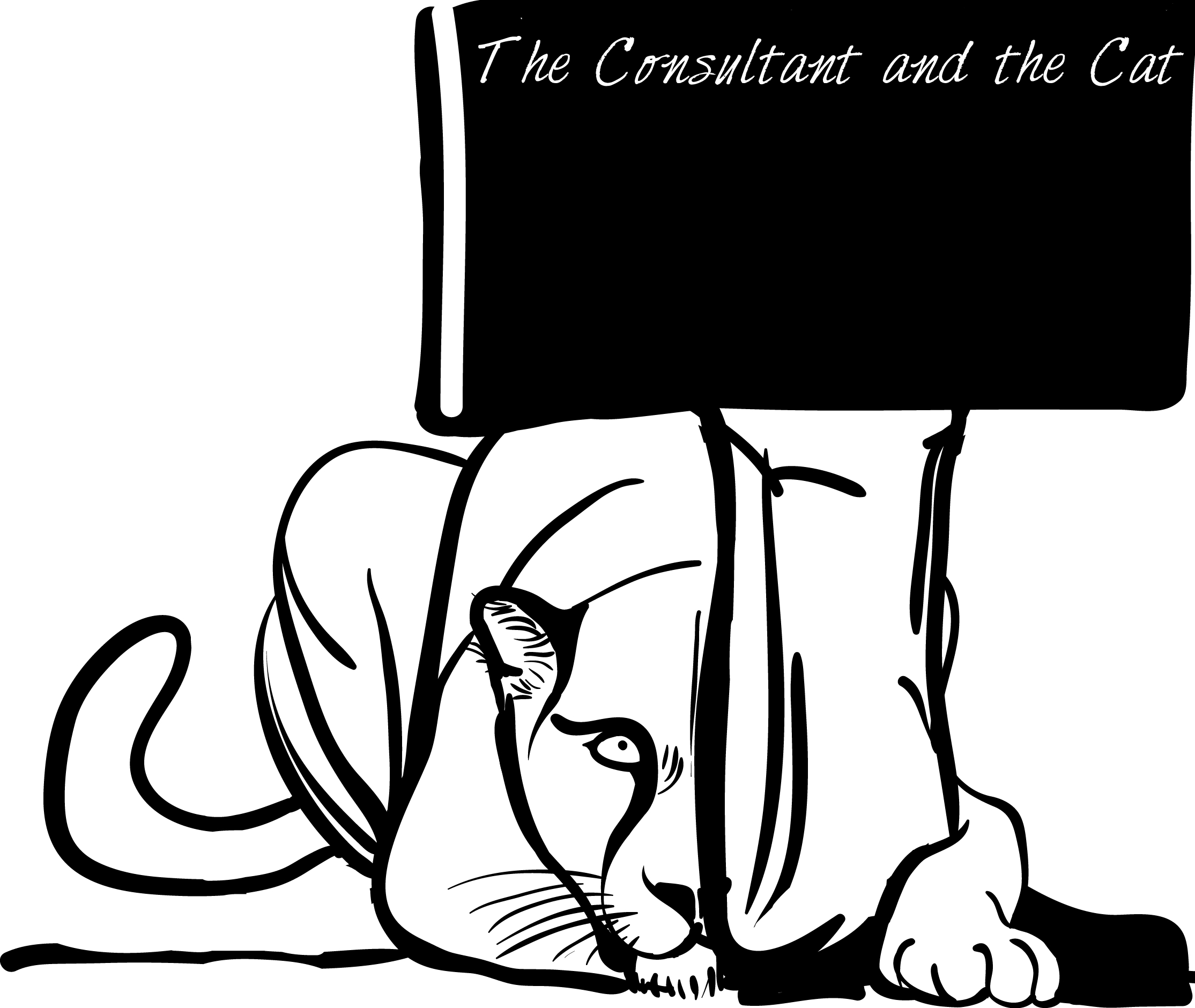 It was kind of interesting today, having a favorite song pop up on Pandora and then realizing that wow, that is so Randolph and Persephone.

I’m not sure if I was thinking back on the lyrics or not, but there’s a part where she flat out asks him, “How fragile do you think I am?”

And the opening verse of the song has this lyric:

You’re saying I’m fragile
I try not to be

But Persephone is also this:

Randolph has a moment when he first sees the Reynolds home, and it’s very much like the verse sung by Don Henley.

Since Randolph comes to the case with lots of baggage from his past, this part fits him very well:

And since it’s a story about them investigating a series of crimes, of course this fits them both:

I search only
For something
I can’t see

Of course, one of my favorite parts of the song is this bit:

Is love so fragile and the heart so hollow, shatter with words impossible to follow?

Kabobbles Sing Along is just what I think when I hear songs. I sometimes see images when I hear lyrics, pictures or movies in my head. Sometimes I relate it to stories. My interpretation of the songs and lyrics are probably nothing like their original intent.

I have to admit: I don’t like making plans.

In my experience, plans never seem to go the way they should.

Therefore, when I considered the idea of scheduling releases and all that would go with that, I didn’t think it would work.

We’ll go with what I’d like to do, then.

What I’d like to do this month is simple, I hope. I want to launch the Nickel and Dime series by publishing the first one in that series, Nickel and Dime.

Next month, I’d like to get All the Men in My Life out there. Hopefully by then I will have a concept for the cover that I am actually happy with. It seems like every time I come up with something, I shortly afterward start to hate it. I would release the next Nickel and Dime novel, Variety Store, in a few months (haven’t quite figured out if it should be two months between them or three or if I need more since I haven’t actually completed the fourth one yet. I might also put out one of the other possible series starts before the second N & D.)

It had been my hope to do something for the science fiction one, to publish The Memory Collector, but I decided that it needed major rewrites first. That process has been started, but I’m still working on it. I don’t have any of the historical mysteries completed, and so that would leave something from either contemporary romance (Unexpected Gifts) or satire/humor (Any Other Reality or The Not-So-Super Superhero) but I’d need to get someone else to go over them besides me and my initial readers. That hasn’t happened yet.

Also, now that I have completed The Not-So-Super Superhero, I would like to have another daily story going (this time I think it would be on the new site, not a blog), but I cannot decide what is best to use for that. Something from one of the other pen names, probably, but I am having trouble deciding on what. I’d also like to have a cover or some kind of art first, but the artist/tech side of Kabobbles has been very busy with moving houses, so that would also have to wait.

In the meantime, of course, there is always more writing to be done. I have some new stuff, my edits, and I have ressurrected another older fic that I did not finish typing before, but now I’m actually getting it closer to completion (it is mostly done by hand, a few bits missing here and there, I just hadn’t fixed the major plot hole or had the patience to type it all.) It marks the second older story that has gained new life, The Consultant and the Cat being the first one, and I do hope this trend can continue with several more completed stories at the end of it. I think I know the one that I would pull up next, though I will probably resume my serial work with Nickel and Dime and The Consultant and the Cat after the stories I have now are complete.

Near the end of the month, I will hopefully be participating in a training course for living history at my local museum, and that will be useful research. I need to call them again because they didn’t call me back when I tried to RSVP. Maybe they don’t want a crazy writer there.

Anyway, that’s the “plan” for now.

I was preparing a little entry for the Kabobbles Sing Along section about the song that inspired my choice for the working title for The Lady in Black’s sequel. Working titles are what I call the story while I’m writing it. Not all of them come with the right title instantly. Some do. Others refuse to be pinned down right away.

Some titles were easy. In the Family was always In the Family from the moment it was begun on my phone. Any Other Reality was that from the beginning as well. I don’t know what else The Monster in My Garden Shed or The Memory Collector could be. The same goes for The Not-So-Super Superhero. He is that. His story could be told under no other name. As soon as I started typing it, I had the title for The Consultant and the Cat. The Lady in Black had a working title years ago that was abandoned before typing began.

On the other hand, other titles have not come so readily. Some don’t even feel right now. That would be the case with The Geek and the Fed and Unexpected Gifts. Each of them took on a new name from their working title, “Geek” and “Obligation” respectively, but they haven’t entirely settled on them. Criss-Crossed Paths started out using its first chapter title, and then it became “Tempest and Lonely Hearts” after the nicknames of two of the characters. The new title is still being debated.

Other titles come along as the story progress.

Just a Whim, believe it or not, started out as “The Crankening,” owing to the other half of Kabobbles Publishing’s daughter, who was extremely cranky when I began the story. Matched Set started out as “Favor,” but once the figurine set started to feature so heavily in it, the matched set made perfect sense.

All the Men in My Life began as “Old Love Best Unseen” which completely doesn’t fit it. The new title owes from a line that Franklin says to Mira, “All the men in your life piss me off.” She responds with, “Franklin, you’re one of the men in my life.”

The series that starts with Nickel and Dime each had their own working title. Nickel and Dime was “Change Your Identity.” Until the end of it, Variety Store was just “Nickel and Dime the Second.” The third one, however, was Five and Ten from the beginning. The secondhand store owned by Effie Lincoln could be called a “nickel and dime” or “five and ten” or even “variety store,” so all the stories have that theme to their titles.

One of the things that we at Kabobbles like to offer as a part of our ebook experience is divider art. It enhances the reading of the story not just in having a pretty picture, but as some ereaders do not seem to keep spacing between scenes and chapters like they should, art makes a nice differentiation between the scenes.

Well, yesterday, the design half of Kabobbles made an absolutely wonderful divider art for The Consultant and the Cat, one almost too good just to be divider art.

Therefore, it must be shared.