A child of the vortex, subject to an insatiable hunger, he fights against his own nature to consume.
29 of 64

Author’s Note: So I pulled a few random travel things that I have done, personally, to create this bit of their road trip. Yes, these things exist. They’re kind of neat. If you don’t believe me, scroll down to see New Salem Sue.

“That is a very strange sculpture. Who would want to make something like this?”

“You object to the sight of a giant cow? I suppose you don’t consider it art, do you, Mr. Black Hole?” Luna walked away from him, and he thought she must be mad at him again, though he didn’t know what he’d done. He thought traveling made her happy, since she sang along with the radio and even danced a bit as she drove.

She had been creating a lot, too, taking photographs and drawing pictures or painting at some of the places they stopped. He thought that was good for her, all of this. If she had a radiant smile when she was outside her bookshop reading to crowds, it was even wider when she was out in the beauty of nature, spinning and giggling as she turned around.

She was free, and that freedom was beautiful.

He frowned, staring at her as she watched Alvin fly around the legs of New Salem Sue with a smile. He was not sure that the word applied to her—yet, surely it must for beauty was of the soul and in the eye of the beholder—and he thought she seemed radiant, at least. She seemed to have a strange energy about her today, something that surprised him after how long they had been on the road.

He did not even know where he was. Luna was the one driving, so she did.

“I just find it interesting that someone chose to do this,” he said as he drew near to her, careful to maintain some distance and still compelled to be as close as he could be.

“Agriculture is a huge part of the economy around here, you know.”

“Is it?” He turned his eyes to the fields under the hill and nodded. Yes, that made sense. He should have known. “I was thinking perhaps the cow was sacred.”

She giggled. “Maybe. I suppose this would make an excellent shrine for cows everywhere. It’s quite the monument already.”

He frowned. “Have you been driving too much again today? I’m not sure this area has enough things for us to stop and look at, and I’m also not sure you’re getting enough rest. If I had known that you’d take us all the way across the country and back again and to places I’ve never heard of, I might have changed my mind about all this.”

She rolled her eyes. “Honestly, Tynan. It’s a road trip. The best part of a road trip is flying by the seat of your pants—literally in Alvin’s case—and doing whatever whim comes to you when you’re there. I see a sign advertising a giant cow or a giant buffalo or a prairie chicken, and I’m going to stop. There’s nothing you can do about it. I’m weird that way.”

“True, that was fascinating.”

“Are you ever going to admit that you used your talents as a shape-shifter to go join the herd?”

“Alvin was having a blast in the pioneer town, locking himself up in jail like a weirdo, so he didn’t even notice that you ditched us, but I did.”

“I was not pretending to be a buffalo.” 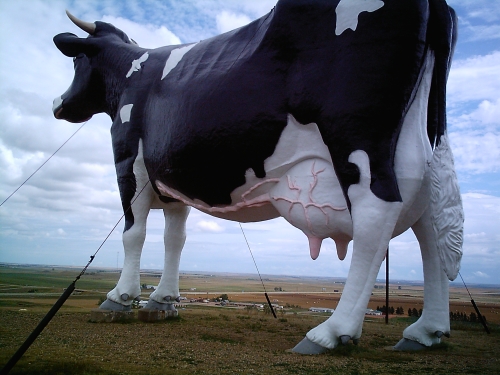