Sorting out Carson's legacy only leads to more questions.
8 of 99

Author’s Note: I was looking through the pictures of a family reunion and stumbled across a picture of a car used for bootlegging, and that car was partial inspiration for the one Mac has. It made sense to make it a Chrysler since the Maxwell car company became a part of Chrysler in 1925. I don’t know if the one in my family was an Airstream Eight, but I included a picture of it anyway.

The Strange Ways of Old Men

Mackenna looked over with a smile as the old Airstream Eight bounced down the dirt road of the driveway, shaking her head as she thought about trying—again—to convince her grandfather that there had been a decent car built in the last end of the twentieth century instead of the first. He was stubborn, though, and she didn’t know that he would ever give in on that end—not that the sixty-eight pickup helped much in that regard. She’d never talk him into a new one with all the bells and whistles, not even if it would mean being able to haul the antiques reliably and make more of the shows and runs he needed to make if he wanted to build his reputation as a mechanic.

She grimaced. His reputation wasn’t in question—whether or not he’d passed that talent on to his granddaughter was. Most people didn’t get a girl like her wanting to drive or work on the Maxwells, and she found herself rolling her eyes when they asked her if she was “capable” of driving one of them. She’d taken that out on Koslow, like always.

“There’s Grandpa. He can give you a better idea of the car’s value than I can, and then I guess we’d better send you on your way.”

Koslow nodded. She thought he still looked lost, not sure what he was doing or what to do, and she wondered if letting him go was like shooing away a stray dog who hadn’t eaten in days. Sure, he didn’t belong, and all that baggage he dragged with him was complicated as hell, but she felt bad about sending him off on his own, in way over his head without even his family to trust.

Then again, most people didn’t have family to trust these days, did they?

She shook that one off and turned to her grandfather, going over to his side as he got out of the Chrysler. “I take it you escaped lunch with the church ladies? No bingo today?”

Mac shrugged. He didn’t say much most of the time, and she could live with that. He was a product of his generation, and she didn’t need to talk much, either. What was there to say, anyway? They knew each other too well, and nothing new ever happened around here. Well, with the exception of Koslow and his inheritance and an apparent murder.

“That the Steadmans’ trailer?”

“Yeah. I need to get that back, too. Borrowed the truck and the trailer. Only thing I own is… well, that,” Koslow said, pointing to the Maxwell. “I guess it’s been in a barn for… thirty years or more. I didn’t even know Grandpa had it.”

Mac nodded, taking off his glasses and wiping them with the handkerchief in his pocket before moving closer to the Maxwell. “Henry never mentioned having it, not to me, and you’d think that he would have.”

Mackenna hadn’t realized that Koslow was Henry Royce’s grandson. She should have connected it sooner, but then he must be one of the daughter’s sons. She knew all of Tim Royce’s boys, and she hated them all. She didn’t know that she’d ever met any of Nancy’s kids. Those boys had scattered across the country and never seemed to visit, not since Mackenna had moved here. She figured they were only here for the funeral and the will.

Mac had a point, though—why wouldn’t Royce have told his best friend, the Maxwell nut, that he had one of them? “Unless, of course, he picked it up right before someone got murdered and hid it as evidence.”

Mac stopped, looking back at Koslow. “You’re the one with the nightmares.”

Koslow fidgeted, uncomfortable under the older man’s gaze. “That still a big deal around here? I’d hoped that had kind of faded off into obscurity.”

She looked at him. “You make a big fuss back then?”

“Half the county got searched with them special trained dogs, looking for a body or some kind of remains,” Mac said, filling in some of the details for her. She’d still lived with her aunt across the country back then, had no idea what it had been like when Koslow made the accusation the first time around. “Not a thing.”

“I wasn’t making it up because I was high. I’m not a drug addict. I only took drugs after that, and they were prescription ones,” Koslow said, getting defensive. “I didn’t—I shouldn’t have brought the car here. I can go.”

“Someone put a bullet in your car.”

“Not necessarily. Could have been something else. Thirty years of neglect does things to a car, right?”

Mac gave him a look. “They ever find your father?”

“So I’m told. Mom said it got worse every year.”

“That’s a hell of a thing to tell a kid, even if your father did run off on her,” Mackenna said, shaking her head. Koslow shrugged, and she sighed. He was a mess. “What do you think, Mac? Could we get her running again?”

Her grandfather nodded. “I’d think so. Have to get her off and get a better look at the rest of her first, but she’s in good shape for where she’s been.”

“You can call the car a ‘she,’ but I’m a chauvinist for assuming that Mac Gilreath means him and not you?” Koslow asked, and Mackenna turned around to smile at him. He shook his head, and her smile widened.

Her grandfather waved her over to the back of the Maxwell. She knew better than to think he wanted to discuss the state of the pinion. “You can’t fix people like you can cars. You take this on, you be sure you’re working on the car, not its owner.”

She shrugged. “Machines are my thing, not people. If I could fix people, don’t you think I’d have started with myself?”

Mac acknowledged her words with a slight move of his head. “Henry worried about that one, worried a lot.”

“Was he scared of him or for him?”

Mac shrugged. She rolled her eyes. Sometimes the old man was impossible. 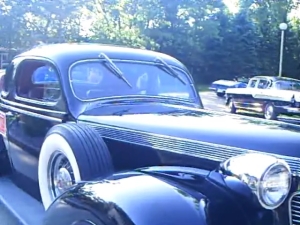